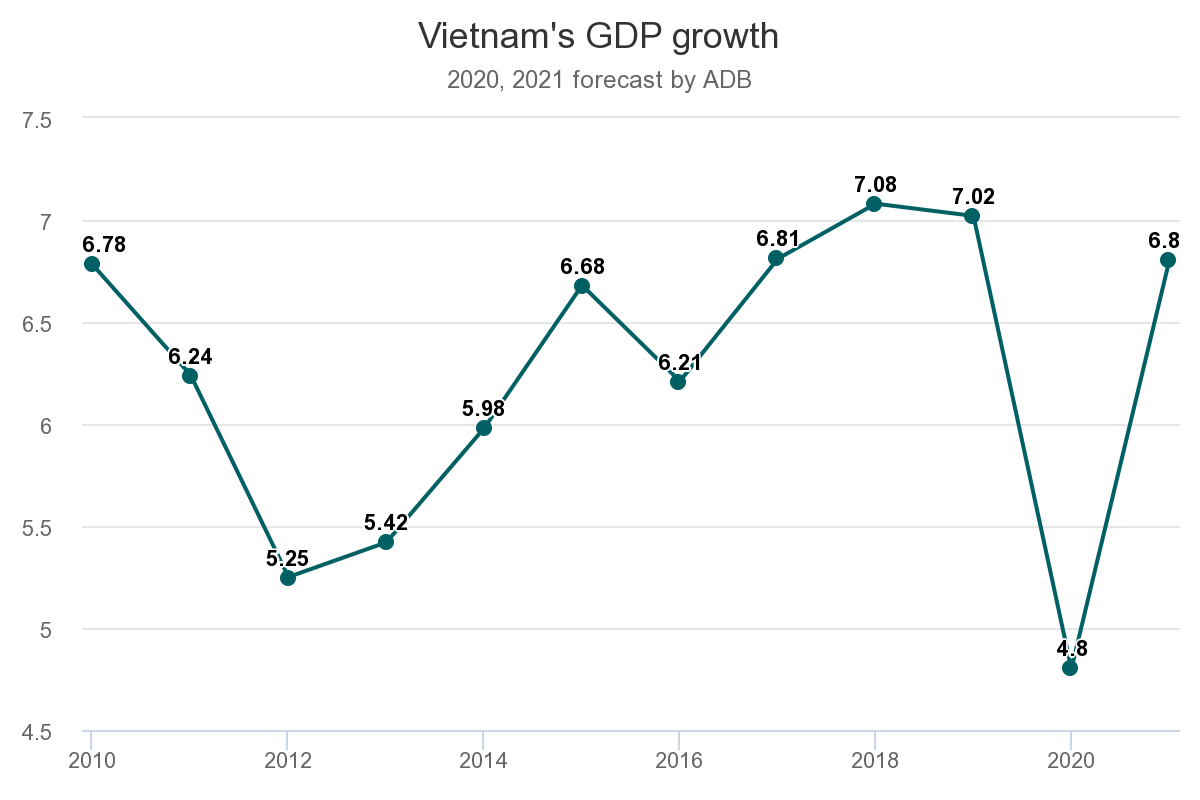 The Covid-19 pandemic could see Vietnam’s growth slow down to 4.8 percent this year, but it will remain among Asia’s fastest growing economies.

The 4.8 percent GDP growth forecast, compared to over 7 percent in the last two years, is estimated on the basis of a Q1 slowdown in multiple sectors including manufacturing, retail, exports and imports, according to an Asian Development Bank (ADB) report issued Friday.

Average inflation in the first quarter rose to a four-year high of 5.6 percent and could reach 3.3 percent for the whole year, but if pork prices stay elevated, inflationary pressures could intensify, the report says.

However, Vietnam’s slower growth is still expected to be higher than the Asia average of 2.2 percent, the ADB report says, which forecasts growth in China at 2.3 percent, India at 4 percent and Singapore at 0.2 percent.

“Despite the deceleration in economic activity and the downside risks posed by the Covid-19 pandemic, Vietnam’s economic growth is projected to remain one of the highest in Southeast Asia,” said ADB Country Director for Vietnam Eric Sidgwick.

If the disease is contained in the first half this year, the economy will recover to a 6.8 percent growth in 2021, the report says.

Several other international organizations have anticipated slower growth for Vietnam this year due to the pandemic’s impacts.

The World Bank had earlier this week forecast a 4.9 percent growth, while market research firm Fitch Solutions estimated it a 2.8 percent, the lowest since 1986.

Vietnam recorded a decade-low GDP growth of 3.8 percent in Q1 as the country fought the Covid-19 pandemic, banning flights, asking non-essential businesses to close and closing tourist hotpots to foreigners.

Last year, GDP growth hit 7.02 percent, the second highest growth figure in the last decade, after a record 7.08 percent in 2018.